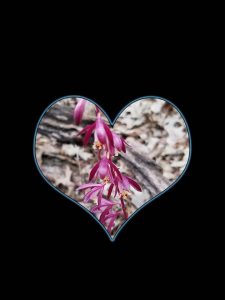 Was it the rainfall?   Dallas has had rainy years before but this year the native orchids found at Cedar Ridge Preserve have broken all prior survey count records. Totals for the nitidas and the warnockiis led the way with 301 and 534 being tagged, respectively. With the arizonicas and spicatas added in the total is a spectacular 900 plus.

It has been a spectacularly good year for the Hexalectris warnockii, with the number of these orchids found surpassing any year since 2006 when the North Texas Master Naturalists began conducting their survey. Lately the survey tag count for H. warnockii has shown a steady increase from the high 200’s to the low 400’s, but 2019 has been the highest yet.

The conversation going around in the survey teams is that prior year rainfall strengthens the trees which support the fungi, which in turn support the current year’s orchids. Not to get too technical, but I have my own theory, which is that this year’s sudden limelight is the reason for such abundant H. warnockii numbers. I believe I can make a strong case for my theory. 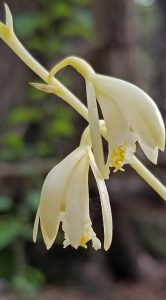 We orchid growers know that our ‘chids like attention. They do better when we show them off and let them know they are special. What better way to give an orchid recognition than to have the North American Orchid Conservation Center at the Smithsonian feature our Texas Purple Spike in the design of an Orchid Gami model? This is the Acadamy Awards for orchids and you can’t get more limelight than that. Our warnockii are just trying to live up to all the award “buzz”. No red carpet necessary – the local fungi will do nicely, thank you very much.

As if this special recognition from the Smithsonian were not enough, our survey has also, for the first time, attracted not only national but international limelight. Native orchid photographers from Ohio (Jun Lao , Cincinnati Orchid Society) and Canada (John Lamey botanist from Ontario) were our guests for the June 2nd survey, and they were not at all disappointed to have made the trip. Not only did they see stunning H. warnockii in bloom, but they also got to see the rare alba version which, could almost be called our own Dallas “ghost orchid”. 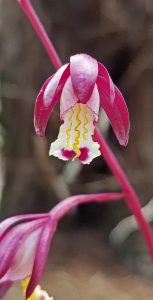 The current year survey, led by Stephanie Varnum ended July 26. We observed and counted 1032 orchids (4 species). Last year was our previous high with 640 observed and counted, a 38% increase this year. Based on the regression model that Dr. Marcy Brown Marsden uses, we anticipated a very good year based upon scientific observations verifying, through drought and deluge, the correlation between the previous year’s rainfall and this year’s crop of orchid blooms. However, even with careful observations we have yet to see an insect pollinator.

Charlie Hess, Master Naturalist, native orchid conservation leader of the Southwest Orchid Growers Association, and gifted painter, has created a beautiful print of the Hexalectris warnockii, or Texas Purple Spike orchid that he is selling with the proceeds to go to the North Texas Master Naturalist chapter.

I am again reminded that with any volunteer effort, key enthusiasts keep the effort alive and thriving. Heartfelt thanks go to Stephanie Varnum who heads this annual survey effort for the North Texas Master Naturalists, and to Dana Wilson (North Haven Gardens/Master Naturalist) who, together with Stephanie, conceived of and promoted the commissioning of the Texas Purple Spike Orchid Gami which will be available in October.