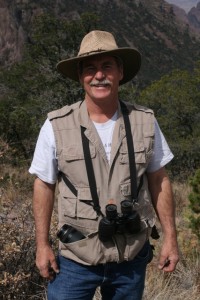 Experience: Roger has been Director of Horticulture for the Texas Discovery Gardens for over 2 years and was the Director of Botanical Gardens /Wildlife Biologist at the Heard Natural Science Museum for the prior 11 years. Usually known as “the Snake Man” by local youths, he has been doing snake programs for Boy Scouts for almost 25 years and teaches the Reptile Study Merit Badge at the Boy Scout National Jamboree in Virginia.  His huge live, native Texas snake collection is one of the best in the state and was used to create the Heard’s widely acclaimed Rat Snakes to Rattlers exhibit and the following exhibit Venomous Snakes of Texas.  Both Roger and his wife are active birders, traveling widely to view new or unusual species.  In 2007 and 2008 they were selected to be part of the Cornell University search team for the Ivory Bill Woodpecker in Arkansas.  Roger is on the board of our local Prairie & Timbers Audubon Society and past-president of the Texas Herpetological Society.  He and his wife are also active members of the Dallas Paleontology Society.   Insects, too, are a favorite subject!  He has been collecting butterflies and moths since the third grade and did research on gall insects at Texas A& M.  Despite his vast background in animals, Roger’s greatest expertise is in plants.  From 1976 to 1982 he was Assistant Director at Texas Discovery Gardens until forming his own landscape company which he still operates part time.  Roger had a weekly column for several years in the Dallas Morning News on plants and gardening and continues to write articles about nature in several publications.

Education: Roger did his undergraduate work at U.T.Austin majoring in Zoology with a minor in Botany and did his graduate work at Texas A&M in Horticulture.  These diverse institutions gave him a unique perspective on nature—as well as a heck-of-a sense of humor!

6:30 – Meet and eat 7:00 – Introduction and Announcements 7:20 – Presentation on the vegetation change of North Central Texas along the Trinity River 8:45 – Adjournment

The meeting place for the October meeting is:

Walnut Hill UMC is the church just north of the AgriLife office on Marsh Lane.

Once inside the building proceed to the meeting room in the basement.

As always all of our meetings are free and open to the public.

Hope to see YOU there!!