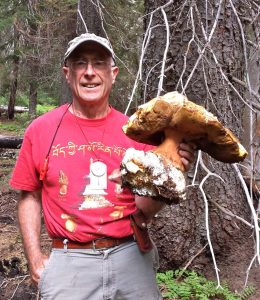 Denis R Benjamin grew up in South Africa, emigrating to the Pacific Northwest in 1970. He practiced pediatric pathology at the children’s hospitals in Seattle, Washington and Fort Worth, Texas. He became an amateur mycologist soon after his arrival in the USA. He is a Research Associate at the Botanic Research Institute of Texas in Fort Worth. He was a consultant to the regional poison control center, a former member of the Board of Trustees of the Puget Sound Mycological Society and a past Chairman of the Toxicology Committee of the North American Mycological Association. He is frequent speaker at mushrooms clubs and societies.

In addition to nearly 100 professional publications, he has contributed to the lay literature and mushroom magazines. He was chosen to be a community Op/Ed writer for the Fort Worth Star Telegram. He is author of the landmark book on the health effects of mushrooms (Mushrooms: Poisons and P 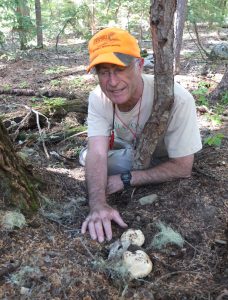 anaceas) and recently published a collection of mushroom foraging essays (Musings of a Mushroom Hunter: A Natural History of Foraging). He is now in the process of becoming a watercolorist.

Schedule:
6:30 Meet and eat
7:00 Introduction and Announcements
7:20 Presentation – Why You Should Love Fungi – Their Role in Ecosystems
8:45 Adjournment

The meeting place for the October meeting is:

Walnut Hill United Methodist Church 10066 Marsh Lane Dallas, TX 75229
Walnut Hill UMC is the church just north of the AgriLife office on Marsh Lane.
Once inside the building proceed to the meeting room in the basement.
As always all of our meetings are free and open to the public.

Hope to see YOU there!!