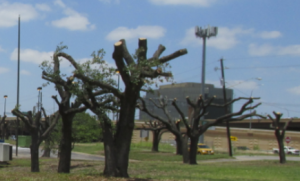 The January meeting has been rescheduled for Wednesday, January 9, 2019.  The meeting will be held At Brookhaven College, in the Miles Building H-125.

See below for more information on the location and time.

It took years of lobbying and negotiating to update the Dallas tree and landscape ordinance. Steve Houser was there from day one in 2005 all the way up until the renegotiated ordinance was passed in 2018. The revisions include incentives for tree preservation and sustainable practices, as well as penalties for non-compliance.

Steve is currently negotiating with city hall on the natural next step for the ordinance; the addition of a Neighborhood Forest Overlay which will protect more trees and encourage proper maintenance.

The success of the ordinance and now the overlay are completely dependent on the determination and effectiveness of articulate tree advocates. Steve will discuss the history of tree advocacy in the Dallas area and the basic procedures and processes that tree advocates can follow to encourage the success of tree preservation initiatives. He has been involved in tree battles as long as he has been an arborist and has a unique knowledge of the subject as a result. The hope is to pass along the knowledge to those who may need it in the future and to help build support for the overlay.

One of the first certified arborists in Texas, Houser is owner/president of a Dallas-Fort Worth area tree-care experts firm that he started 38 years ago. The firm employs many of the state’s top consulting arborists, as well as national and international award-winning tree climbers. He is well regarded by his peers within the industry; the Steve Houser Award of Excellence (aka “The Houser Cup”), established in 2001, is awarded each year to the Texas state tree-climbing champion by the International Society of Arboriculture, Texas Chapter.

In his spare time, Houser contributes more than 1,000 volunteer hours each year toward worthwhile tree-related causes, educating the public about trees and natural resource-related issues. He teaches forest ecology to Master Naturalists and tree biology/arboriculture to Master Gardeners in North Central Texas. He has been an advisor for Vision North Texas since its inception and works diligently to encourage responsible and sustainable land use.

As always all of our meetings are free and open to the public.

Hope to see YOU there!