We received sad news that our friend and fellow Master Naturalist Lee Kelton passed away on Saturday, April 11th. Our thoughts and prayers are with him and his family. Amy Martin, NTMN class of 2018, wrote the tribute below. Her longer version, published by GreenSourceDFW, includes testimonials from NTMN members and covers his efforts with NTMN, Oak Cliff Earth Day, and the Celtic community. A tribute album of photos is up at Flickr. Donations in Lee’s name may be made to Twelve Hills Nature Center.

Some spirits depart and the void is immense. Lee Kelton is one of those people. A matchless spirit who gave so much to the world. Dallas is a better place to be because of Lee, and we were so lucky at North Texas Master Naturalists that he gave so much to us. It was sudden, being diagnosed with acute myeloid leukemia only last week, and his family was with him as he passed, including his wife Lybo Buchanan, class of 2020.

Starting with his graduation in 2012, Lee was integral to NTMN. He could work a Nature Discovery Trunk like no other. People flocked to the table to experience his raconteur spirit, but also his deep nature knowledge. His vision, affection and hard work infuses every square foot of Twelve Hills Nature Center, and his legacy will live on in all the students he interacted with in the Nature Leader Program at Rosemont Elementary, especially his posse of 5th-grade boys.

Lee was the energy and soul of the Oak Cliff Earth Day with Lybo, stepping up in a big way after his brother-in-law Coke Buchanan passed away. His volunteer spirit graced Cedar Ridge Preserve, Texas Discovery Gardens, and Rogers Wildlife Rehabilitation Center. He was active with Audubon Dallas and the Texas Wildlife Association where his enthusiasm enthralled Texas youth in the L.A.N.D.S. (Learning Across New Dimensions in Science) program. Recognizing his outstanding service, NTMN presented Lee the Volunteer of the Quarter Award in the summer of 2019. 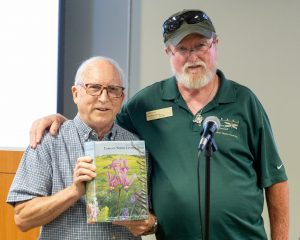 Before he was part of NTMN, he was a cornerstone of North Texas Irish Festival. The NTMN booth at NTIF was enlivened by his mirthful visits and occasionally by his gift of whiskey shots. From his Irish enthusiasm with NTIF, to his outreach with NTMN and more, to his Oak Cliff activism staged from the love-filled house on Kings Highway he shared with Lybo, to the way he made even strangers smile every day, his is a tremendous loss.

Lee called himself a landman, working in the management of oil fields in Oklahoma, Wyoming, and Texas. He retired from Lone Star Gas as a Senior Petroleum Land Manager. From that point 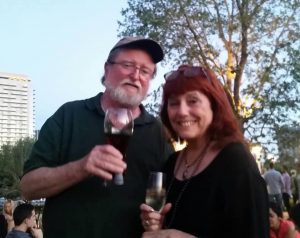 on, he was a land man for nature, pouring himself into the recruiting others to care as deeply for the Earth as he did.

His great heart, his deep spirit, his huge hugs, his terrible jokes, his deep laughter, his endless stories! The party started when Lee arrived. He was truly an overgrown Irish leprechaun, robust and larger than life. His eyes had a perennial twinkle. NTMN gatherings will simply not be the same without his presence. Our hearts go out to Lybo Buchanan, his loving family, and to the myriad of people who call him friend. At sunset tonight, raise high your favorite beverage (he’d appreciate if it were whiskey) and remember this great man and all he has done for our world.

The family asks that donations in Lee’s name be made to Twelve Hills Nature Center. We will keep you posted on the family’s decisions about arrangements.