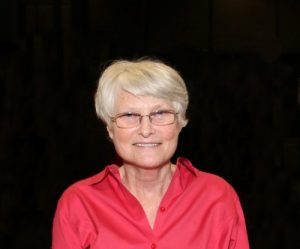 Bio
Barbara grew up in Plains, Montana and moved to Texas with her husband when they were seeking warm weather.  She has been a Master Naturalist since 2003.  Barbara has led the Citizen Science Project “Amphibian Watch” for many years.  Each year, from April until October, on the last Friday evening of the month just before dusk, you can find her at Sunset Bay on White Rock Lake.  She will be armed with recorded frog calls and pictures of the likely species to be identified.

Walk “What’s That Calling from the Lake?”
Come learn about the 5 or 6 species of frogs most likely to be found on any night at White Rock Lake.  After a brief session spent listening to the different calls, we will hike around the area listening and looking for frogs.  A small flashlight would be handy.