Being Brown in a Green World

An Opinion Piece by Blanca Reyna, class of 2019 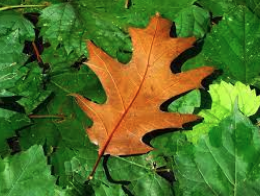 I hesitated to use this title and image for my essay. So much so that I tried hard to think of others to use instead. But none reflected the words I had written, nor the message I wanted to convey. My reason for having so many second thoughts was because I feared that the title might raise some eyebrows, cause uncomfortable feelings or generate strong reactions. Last October, I actually experienced something of that nature when someone commented on an article I shared on our Facebook page. Although I am still not sure of the meaning or intent of that comment. It’s possible that I may have misinterpreted it.

It was during Filipino American History month and the article was celebrating Regie Pablo’s accomplishment of climbing Mt. Everest. It was titled, “A Brown Face on Everest: Filipino Climber Regie Pablo Defies the Norms” on the Brown Gal Trekker website.

To be clear, I didn’t write that article, nor did I create the title. The article came from a blog called Brown Gal Trekker, created by Marinel M. de Jesus, a Mountain Nomad, Human Rights Defender, DEI Advocate, Social Entrepreneur and Writer.

That post prompted a comment something along the lines of “What does it matter that his face is brown. He’s a human being? That’s all that matters.” Now, in all fairness, I know that it is difficult to determine tone or intention on anything that is written, whether that be an email, letter, text, social media, etc. Especially when you don’t know the person who wrote it. My initial thought was shock and confusion. I wished they could help me understand their comment. It could very well be that they thought or felt I was referring to him in a derogatory way and that they intended to defend Regie Pablo.

Maybe they didn’t realize that Regie, Marinel and myself, even though I am Latina and they are both Filipino, all identify as Brown. And we were celebrating this proud moment for all People of Color. It could be that they couldn’t understand how inspiring it is to see any Person of Color on Mt. Everest. They may not realize that representation matters and how empowering it is. It is like that phrase – “If She Can See It, She Can Be It.” , which is intended to encourage girls and women to defy gender norms and aspire to be anything they want to be. The same is true for the article I posted during Filipino History Month. It’s purpose was to inspire other People of Color to defy and crush stereotypes.

And the same goes for these that I am sharing in honor of Black History Month. One story is about an all-Black team climbing Mount Everest for the first time. The other article is about Black hikers who break the ‘green ceiling’ and clear a path for nature enthusiasts.

I wonder if that person who made that comment had even read the article about Regie. Perhaps if they did, they would realize why it did indeed matter. But I don’t even know if it is possible to help someone understand something that they have never experienced and will not likely experience. When it comes to nature, outdoor related activities and STEM – there are so many reasons why communities of color don’t participate or show an interest in doing so. Too often it is assumed that it is either due to lack of interest, not part of our culture, or that we don’t enjoy it.

During my time on the DEI Task Force, I have read many articles about the experiences and challenges of other People of Color and I have identified with so many of them and have felt validated. When the article about Black hikers breaking the “green ceiling” mentions about the history of awful things happening in the woods, it reminds me about some terrible truths about the Trinity River that many people may not be aware of. Sometimes even newer generations of BIPOC communities don’t know these things – all they might know is to stay away from the Trinity River, or perhaps it is not even talked about – probably in the “Speak No Evil, See No Evil” sense.

It is hard for me to hear someone say something like, “I don’t understand why there aren’t more People of Color visiting the Trinity River.” or something like “I can’t believe so many people have never even been down to the Trinity River, when it’s literally in their backyard!” because I think I may know some of those reasons.

I have lived in Dallas all of my life and have seen many changes – both good and bad. There have been some amazing things that have happened and are happening now. But, I’ve also seen many things that didn’t need to change, but they did and I’ve seen many things that needed to change, but they didn’t and I wonder if they ever will. I grew up in a big family and there is quite an age gap between me & my older siblings. To give you an idea, my big brother is 18 years older than me. When I was younger, I would hear my parents, aunts & uncles warn the teenagers in the family – especially the boys – “You better behave & stay out of trouble. Don’t get pulled over by the police or they will take you to the Trinity.”

As I got older, I would hear stories about “so & so’s son got picked up & taken to the Trinity.” But being so young, I never fully understood the true danger in those things. I just thought that it was a teenage version of “El Cucuy”. In Latin American tradition, that is like the “Boogey Man” and it’s what many parents use to remind their children to behave. Fast forward to my adult life. A few years ago, at a community event, a historian was talking about the history of DPD’s police brutality against Black and Brown communities. She was Mexican-American and had grown up in Dallas too. When she mentioned what would happen to young Black & Brown men when they were picked up by DPD back in her time, I finally understood that what I would hear when I was young, was not just a scary story, it was an awful reality.

This is what she said, ” If they were lucky, they would get taken straight to jail. If they were not so lucky- they would get taken to the Trinity River bottoms first and then get taken to jail. Sometimes they’d end up in the hospital.” It was eye opening and painful to hear this. Another thing I found out a few years ago, is that there were a couple of recorded public lynchings that occured near the Trinity River. And those are just the ones that were documented. Knowing these things now helps me understand why people may avoid the Trinity River altogether – even if it is in their backyard. There is a lot we can all learn from each other, we just have to lean in and listen.

Here is one last article I’d like to share :
Why are so few minorities visiting our National Parks?