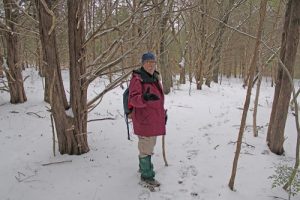 Bill Holston has been a North Texas Master Naturalist since 2011. Bill has a BA from UTD and a JD from SMU.

Since 2012 Bill Holston has been the Executive Director of Human Rights Initiative of North Texas.  Prior to that he practiced law with Sullivan and Holston.  Since the 1980’s Bill has provided pro bono legal representation for political and religious asylum applicants. Over the years he represented clients from 21 countries in Immigration Court or before the Houston Asylum office. In 2005 he was awarded the Angel of Freedom Award by HRI. In 2015 he was named a Distinguished Alumni for Public Service by SMU’s Dedman School of Law. In 2019, he was honored with the Martin Luther King Jr Award by the Dallas Bar Association.

He has been a commentator for KERA and currently writes commentary for the Dallas Morning News on immigration and human rights issues.

Bill is a member of the North Texas Chapter of Master Naturalists, guides hikes in the Great Trinity Forest and is an Eagle Scout and writes a column for D Magazine’s Front Burner Blog, Law Man Walking.

Bill is married to his best friend Jill, a Dyslexia Specialist for RISD, and they have two grown sons. They are members of Greenland Hills United Methodist Church.