Climate change and deforestation are the focus of two outstanding new nature books.  Both are timely, informative, and wholly enjoyable. 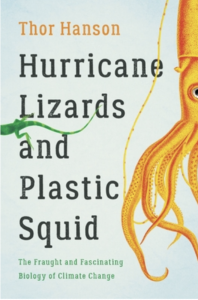 Climate biologist Thor Hanson discusses research carried out by scientists in many regions. In Hurricane Lizards and Plastic Squid, they conclude that 25-85% of species on land and sea are seeking new habitats, geographically placed to accommodate their changed comfort zones. How dramatic are these changes here in North Texas? For how long will colorful visitors like white pelicans and double-crested cormorants make their seasonal home on White Rock Lake? In our yards, we can’t be sure of migratory change as the perpetually ravenous squirrels rarely give the birds a look-in. 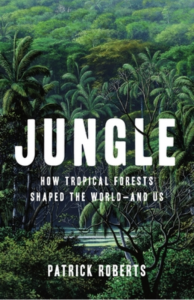 In Jungle: How Tropical Forests Shaped the World—and Us Patrick Roberts relates how tropical forests provide space for half the plants and animal species in the world. He takes readers beyond the headline woes of the Amazon region, to explain how elsewhere, as in the high altitude Asian tropical forests similar devastation may be seen.  And the blame? In large part because colonial settlement demanded massive land clearance for monocropping sugar, coffee, and similarly marketable agricultural products. Does 19th and early 20th century devastation of the Great Plains deserve similar indictment?

Neither title is alluring but both books are well and clearly written, and their messages are memorable. Click on the photos to read more about each of these books.