by Carol Garrison, NTMN class of 2015

As a certified Bat Conservation International (BCI) Bat Walk Ambassador, I was truly lucky to have the opportunity to experience a bat emergence in July at the Bracken Cave Preserve near San Antonio. BCI purchased the cave and the surrounding 4.7 acres in 1992 in order to preserve the largest colony of bats in North America. This preserve has grown to 1,458 acres through additional land purchases over the past 20 years. The land immediately adjacent is owned by The Nature Conservancy, and together these two non-profit organizations are stewards for 3,462 acres of pristine Hill Country. 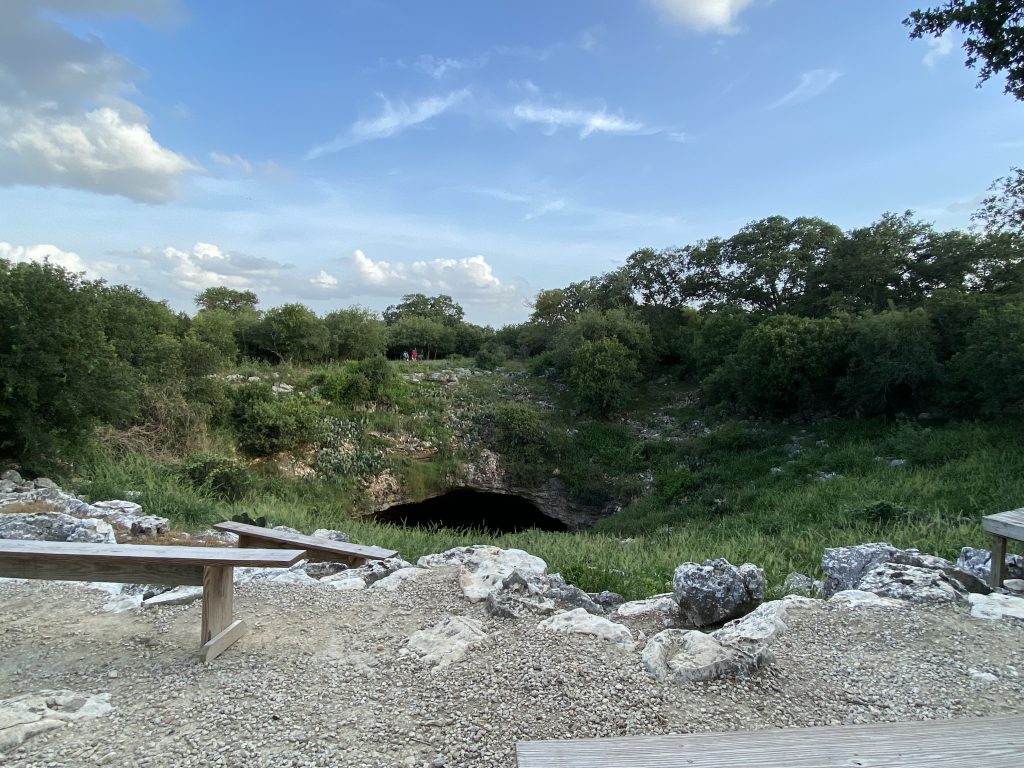 We arrived at the preserve (which is an easy-to-miss turn off the highway within walking distance of the exit to The Natural Bridge Caverns) in plenty of time to take in the stunning Texas scenery before the bat talk started. The unmistakable scent of bat guano was thick in the air. I walked down to the entrance of the cave and immediately realized that despite having completed the training for the Bat Ambassador program, I still had lots of questions!

Thankfully, there were two stations manned by knowledgeable Texas Master Naturalists that educated us on the dimensions of the cave, and the history of the guano being mined as one of the three ingredients to make gunpowder during the Civil War and World War I.

Fran Hutchins is the inspirational director of Bracken Cave Preserve.  He gave an educational yet humorous talk about the estimated 20 million Mexican Free-tailed bats that currently inhabit this cave March through September. Bracken Cave is a maternity ward; millions of pregnant females migrate to the cave in March to give birth. Once they give birth, they carry their single pup clinging to their body during their nightly ascent out of the cave to search for food. It does not take long for the pups to reach their mother’s size, and then the mothers are forced to leave their babies in the cave as they search for sustenance to produce milk for their young. These mothers are astonishing; they can recognize their infant amongst millions of other pups screaming for milk. By the end of July, the pups join their mothers in the nightly flight. 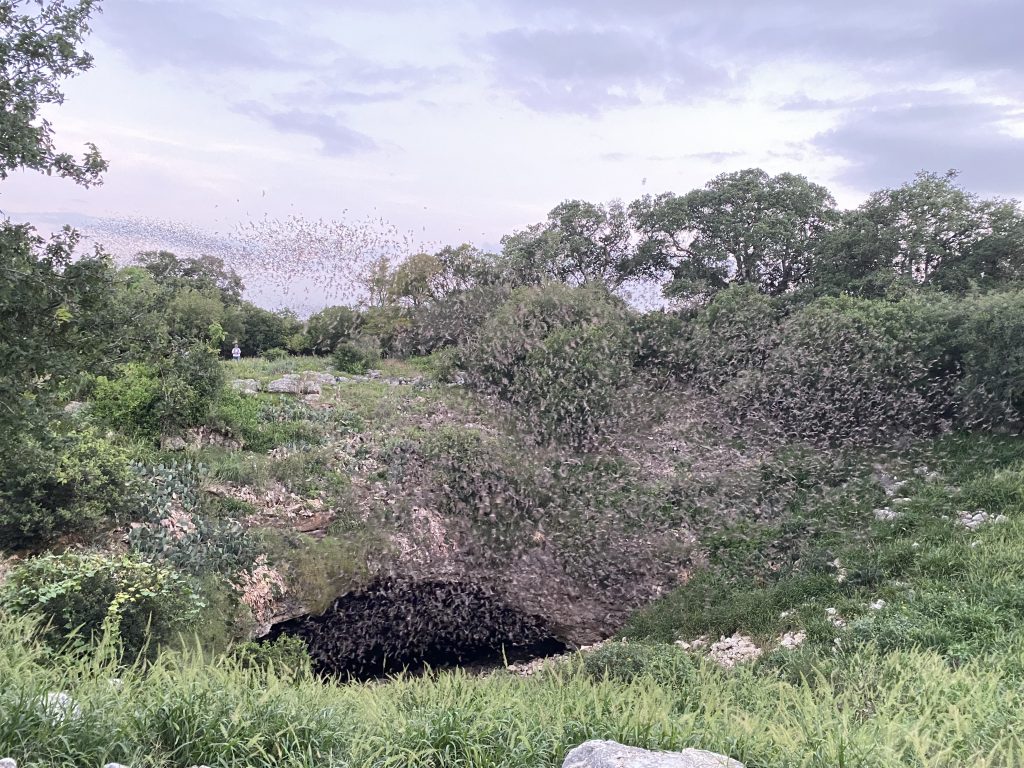 Millions of bats emerge from Bracken Cave every evening. Photo by Carol Garrison

The group of 50 attendees was focused in anticipation of bats escaping the confines of the cave. All of a sudden, the “batnado” erupted out of the cave, and the sound of millions of wings flapping at almost imperceptible speed filled our ears. Fran advised us to cup our ears with our hands, and the sound was something I will not likely forget in my lifetime.  The bats poured out for over an hour without any abatement. After an hour of millions of bats swirling continuously, the volume subsided enough to actually see individual bats exiting the cave. Fran explained that some pups will often leave the cave, fly around a bit, and then return to the cave and wait for their mother. It is a chaotic time for cave emergence; the pups are trying to figure out how to fly in formation with millions of other bats all flying 20 feet per second in a tightly wound spiral that winds its way out of the cave. Predators such as raccoons, bobcats, and coachwhips await the bats just outside the cave entrance, and Swainson’s Hawks soar 60 feet above the cave entrance for their nightly feast.  This particular July is quite unusual according to Fran. The prolific rains have created a thick grassy entrance to the cave which is normally according to Fran, “50 shades of brown”. We were not able to see any of the snakes or raccoons as the grasses and still blooming wildflowers were 3-5’ tall right up to the cave entrance. We did observe three hawks hunt the bats during the evening. Unlike other mammals, bats are NOT adoptive. If a mother is eaten by a hawk, her pup will starve and fall to the 70-80’ thick layer of guano below the roosting site to be eaten alive by carnivorous dermestid beetles. The fatality rate of the pups is high; almost 50% will perish before they reach one year old.

Once the sun went down and the emergence slowed a bit, we got the opportunity to visit with fellow Bat Ambassadors, visit with Bat Walk Network Coordinator Erin Cord. We even had the thrill of seeing a couple of bats up close that are being cared for by conservationists from BCI. One Mexican free-tailed bat had an injured wing and would not survive in the wild. Seeing the bat in Fran’s hand made me realize how terribly fragile yet resilient these 3.5” long insectivores are, and that despite their diminutive size, they are a critical part of our ecosystem. 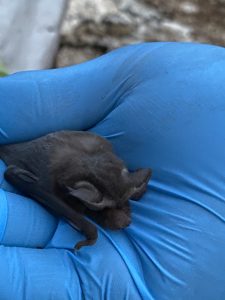 Bat emergence attendance is by reservation only, and it fills up FAST!

Bat Conservation International has most of their bat emergence viewings for members only (join and support them!), but there are some public viewings that you can reserve as well.  Here’s the link to their website to make reservations.