Carroll and his wife Bobbie were in the class in 2007. Carroll had a real gift and interest in photography and formed the first Photographic Committee for the chapter to ensure that all events were covered. My immediate memory of those early years is Carroll organizing annual group photos, where there were so many of us that it might as well have been a crowd shot at a football game. He was always trying to get everyone into the photo and was never quite satisfied with the first attempt – cajoling us with good humor to stay put for the next several shots.

His dedication to visual documentation of the chapter’s history has been excellent, and he has helped to communicate what we do to current and future NTMNs as well as the public. 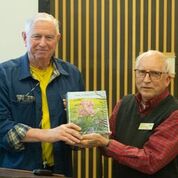 In recognition of his valuable contributions, Carroll has been awarded our last Quarterly Award for 2018.

Carroll Mayhew grew up in Fort Worth, attending Poly High School,  then the University of Texas at Arlington.  During that time he married his high school sweetheart, Bobbie. After receiving his master’s degree in aeronautics from the University of Texas, he worked at NASA, helping design the ascent stage engine of the lunar module on the first manned trip to the moon. Carroll later worked for the government in helping build hospitals on Indian reservations in the Southwest.

In the words of Catherine Rogers: “Carroll is the photographer in just about any group.  When home video cameras were becoming the latest thing he would video gatherings of friends.  More than once he lugged a huge video camera onto the ski slopes in Colorado to photograph his children, friends and their children.

“Carroll is always helping people. He and Bobbie volunteer at C.C. Young helping residents solve computer and iPhone problems. He also works several days a week at the Richardson Bike Mart.  He takes great pride and delight helping people select a bicycle.  Carroll has been an avid biker doing tours such as the Hotter Than Hell Tour and the Colorado Tour of the Rockies and biking in Portugal. He and Bobbie have ridden many a mile throughout North Texas on their tandem bicycle.

“Perhaps one of Carroll’s greatest strengths is his wonderful sense of humor.   He will help anyone solve a problem no matter how big or how small.  But the best part is that he does it with laughter, making the problem seem not nearly as big as you once thought.”

Further, to paraphrase Natha Taylor:  Carroll Mayhew is a great photographer. He and his committee of photographers covered most of the chapter’s events and he would organize the photos and disseminate them to places where they could be used to tout the wonders of what the chapter was doing.  They found their way to the newsletter, website, historian, and any project leader that requested them. As historian, I was very grateful to Carroll for his dedication and what a difference it made in creating our chapter history.

Thank you, Carroll, for doing what you do so well. We will always say “cheese” for you.