By Esther Villarreal, NTMN class of 2021

On Sunday, July 25th, Blanca Reyna invited me to an event she planned to commemorate the closing of Latino Conservation Week. Blanca and others from the Latinx Inclusion Team planned this event last year; and while COVID prevented us from a week-long party packed with events, this year we had a more intimate celebration. 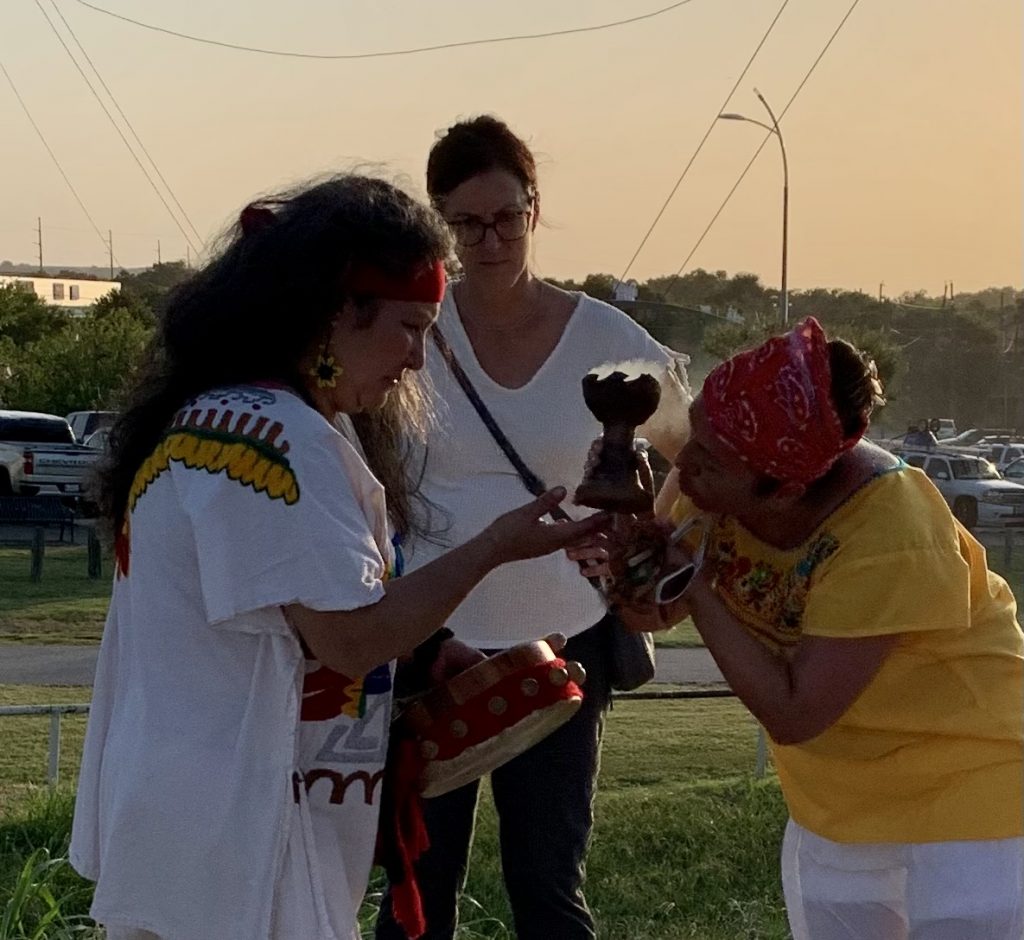 I was joined by Blanca’s tribal dance group consisting of dualidad partners Ome & Hugo. (They use “dualidad” instead of “esposo”/ “esposa” to emphasize that there is no “head” of their relationship, they are equals, they are a true 50/50 partnership.) Members of the Diversity & Inclusion Team were present. We all stood in a half circle up on the south side levee at Felix H. Lozada Sr. Gateway Park on the Ronald Kirk Bridge in West Dallas. Blanca encouraged us to “say their names,” in order to maintain collective memory of West Dallas activist and WWII veteran for whom the bridge park is named, as well as Dallas’ first Black mayor, Ron Kirk.

A week before, I was made aware of Latino Conservation Week through an incredible PBS documentary on the Bat Man of Mexico, forwarded to us from Blanca. I had never heard of this celebration before, nor the Bat Man. I was disappointed we could not do much this year, and have high hopes to celebrate this week next year! I am Anglo and my husband is Mexican-American, so it is through marriage that I am honored to be welcomed into Latin culture. When I got the invitation from Blanca, I jumped at the chance to raise awareness about this special week. I was not expecting to spend 90 minutes in a deeply moving, spiritual ceremony with my fellow Master Naturalists! 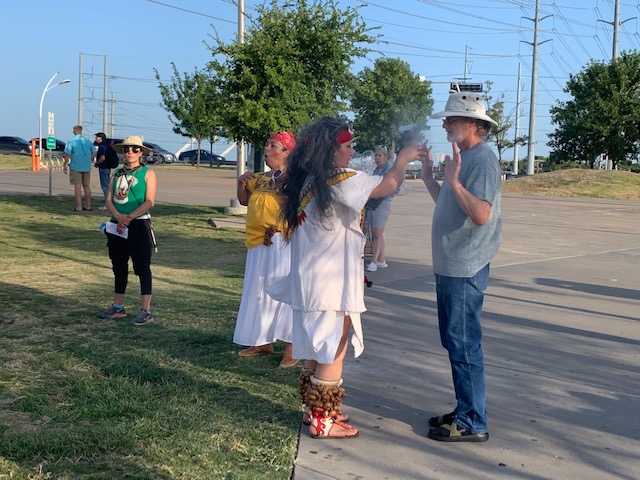 Hugo played a drum carved from a tree that called to them and offered itself as a gift of their instrument. Ome blew into a conch shell. Blanca asked us to form a circle around Ome, Hugo, and Ome’s mother and father in law who were visiting from Mexico City. Ome turned to each of the four directions and Blanca gave four unique blessings,  as we watched and turned our bodies to face the  East, West, North and South. Then Ome came with a censer, wafting incense around each one of us, blessing us and cleansing us for the ceremony ahead. Next, Blanca and Ome blessed the ground and the sky, our mother and father, from whom we are made. We then followed our guides down the road to the river’s flood plains and walked along, noting the numerous native birds feeding in the shallows of the floodplain. The birds flew overhead while our guides shared indigenous beliefs and stories about Wind, Water, Earth, and Fire, Ome and Hugo’s ancient Aztec roots, and my most memorable takeaway-why we celebrate Dia de los Muertos in the Fall.

Blanca taught us that there are three dimensions of the earth: the underworld, the middle earth, and the heavenlies. The tree is the one thing in nature that spans the breadth of all three dimensions of earth. It has its roots in the underworld, and its branches reach into the heavenlies.  In “Otoño”, the Fall, when the tree is bare, its branches exposed to the sunlight, our ancestors who have passed on to the underworld finally have an open ladder to commute up to the heavens. We celebrate the deceased as they travel up the ladders to go visit the sky.

It was an incredible evening where I learned so much rich history and walked away with a solemnity that I can’t quite express. Next year during Latino Conservation Week, to celebrate the contribution Latin cultures have had in Nature, Blanca hopes to again lead us in an opening and closing ceremony. Next time you’ll all be invited. And remember, Latino people are some of the original conservationists!

To learn more about Diversity and Inclusion at NTMN reach out to the committee here.