A recent trip to the Ft. Worth Nature Center and Refuge, which I highly recommend visiting, brought me back to a childhood memory. My brothers and sister did not like spiders. My parents lost no love over them either. But I always wanted to just move them to a better area, since critters in general lived on that property long before our home was built. The Daddy Longlegs were one of my favorites, so I would scoop them into a jar, and take them outside, much to the relief of my family. There are some insects though, which I have always detested, poor things.

On a guided tour with the naturalist at the Nature Center, we were introduced to a special sight on one of her favorite trails: a group of Daddy Longlegs. These are in the Class* Arachnida, same as spiders, but are not spiders. The more correct common name is Harvestmen, since on other continents, some “Daddy Longlegs” are different species and are actually spiders.

*(Remember King Phillip Came Over From Great Spain mnemonic device for Kingdom, Phylum, Class, Order, Family, Genus, and Species.) Like spiders, Harvestmen have 4 pairs of legs, chelicerae or fang-like mouthparts, and 2 pedipalps or antennae-like appendages near the mouth. 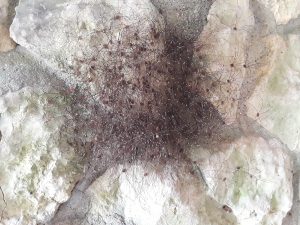 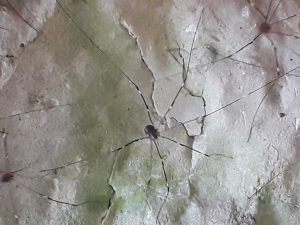 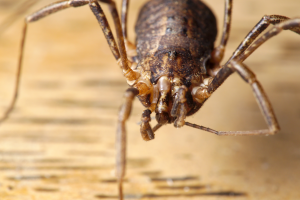 “Harvestmen have one body section (spiders have two), two eyes on a little bump (most spiders have eight), a segmented abdomen (unsegmented in spiders), no silk, no venom, a totally different respiratory system, and many other differences; not all have long legs.” 1 There are many unknowns about them and many variations, so open for more research.

They’re in the Order Opiliones, family Phalangiidae. “They are reddish brown, with long stilt-like legs; knees are up in the air but body is close to the ground. Body is oval and compact, not divided by slender waist like spiders.”2 Harvestmen can be 3”-6” long, their body not exceeding 1/2” of that total. There are about 200 known species in North America, but another source 3 states there are 37 families of Harvestmen in the world, with 18 species in Texas. And yet another source 4 states there are over 6,500 species worldwide, on every continent except Antarctica. There is only one generation each year. They are sure interesting creatures!

We asked our guide why we did not see a web. When she tapped the rock pile where they were congregating, she explained that they don’t need any.

These pictured above live less than a full year, undergo incomplete metamorphosis going through 6 instars. Some sources state females have only one egg, while others state she lays hundreds. Again, there is much species variation and room for more research. They groom themselves by running each leg through their mouth to clean. (See photo #3.) While all legs have hairs on them, the second pair is the longest, and has sensory hairs that can detect vibrations from their prey’s location. Instead of stinging, they simply grasp and tear apart their prey with their legs and consume. They eat dead and live soft-bodied prey. They are omnivores, which eat arthropods that include pests such as aphids, grasshoppers, larvae, slugs, and mites.5 so are considered beneficials. Some have been seen to eat small bits of pollen when other food sources are not available. They do need a humid environment.

“’Their most obvious feature to avoid predation is to produce chemical excretions from glands on their bodies, which have been observed to repulse predators,’ Clouse says.”5 When a group of them release the odor at the same time, it can be overwhelming to some smaller threat, and may affect their taste. If attacked, Harvestman can release a leg, which will continue to move for some time, confusing the predator. The leg will not grow back, but they seem to accommodate. If they lose a leg during an early instar, a new leg may appear, though it will be deformed. Harvestmen “are usually extremely well camouflaged. During the day many of them hide in crevasses, and when disturbed they usually play dead. The predator loses sight of its prey, as it remains amidst the leaves.6  Harvestmen appear to have good “boxing” moves too, as they bob up and down when threatened, which distracts and confuses their attacker.

So the next time you see these creatures, appreciate a few of their obvious unique features, or at least some of the differences that define them as creatures other than spiders: Spiders have venom, spin silken webs, have 8 eyes and a slim waist. Harvestmen have no venom, no silk, only 2 eyes, and no slim waist, but appear to have an oval shaped body and head unit.

1 https://www.burkemuseum.org/collections-and-research/biology/arachnology-and-entomology/spider-myths/myth-daddy-longlegs-kind-spider
2 Texas Bug Book. The Good the Bad and the Ugly, by Howard Garrett and C. Malcolm Beck, c 2005 by University of Texas Press, p.54. This book is loaded with brief descriptions and good photos of many “bugs”, including a valuable listing of beneficials at the back.
2 MGA Galveston. https://aggie-horticulture.tamu.edu/galveston/beneficials/beneficial-46_harvestmen.htm This was a very well written article on this topic.
4 https://owlcation.com/stem/Facts-About-Harvestmen-or-Daddy-Longlegs-That-May-Surprise-You  This was by far, the best article, and has some excellent videos. That author’s sources included U of KY, Ohio State, and MO Dept of Conservation.
5 https://ohioline.osu.edu/factsheet/ent-68
6  http://mentalfloss.com/article/59455/15-fascinating-facts-about-daddy-longlegs
7 Ibid. 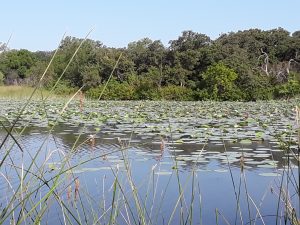 Pond lilies at Fort Worth Nature Center and Refuge. Photo by Erika Choffel

Fort Worth Nature Center is a great place to walk, hike, and enjoy flora & fauna. There are remarkably few visitors, especially mid week in August heat. But it is well worth the trip. http://www.fwnaturecenter.org