The Spring Creek Forest Preserve is a hidden gem located on the north side of Garland, Texas. The Preserve is known for its relic Blackland Prairie bottomland forest, which is dominated by mature native tree species such as chinquapin oak (Quercus muehlenbergii), shumard oak (Quercus shumardii), and bur oak (Quercus macrocarpa). The Preserve hosts many communities of beautiful native plants (Trout lilies being one) and stunning views of several eggshell white, limestone featured characteristics of the Austin Chalk geologic formation. One thing that may not be noticed as easily, is the many fish species that inhabit the creek (Spring Creek) that runs through the Preserve. A fish survey led by Mr. Jordan; a graduate student, was conducted in October of 2021 which enabled us to get a closer look at the number and abundance of species swimming about in Spring Creek. Fish surveys are performed by biologists on creeks, streams, and rivers for a multitude of reasons. The overall goal of this fish survey was to provide an updated fish species list for the Preservation Society for Spring Creek Forest and support a larger on-going aquatic life survey taking place within the Upper Trinity River basin. 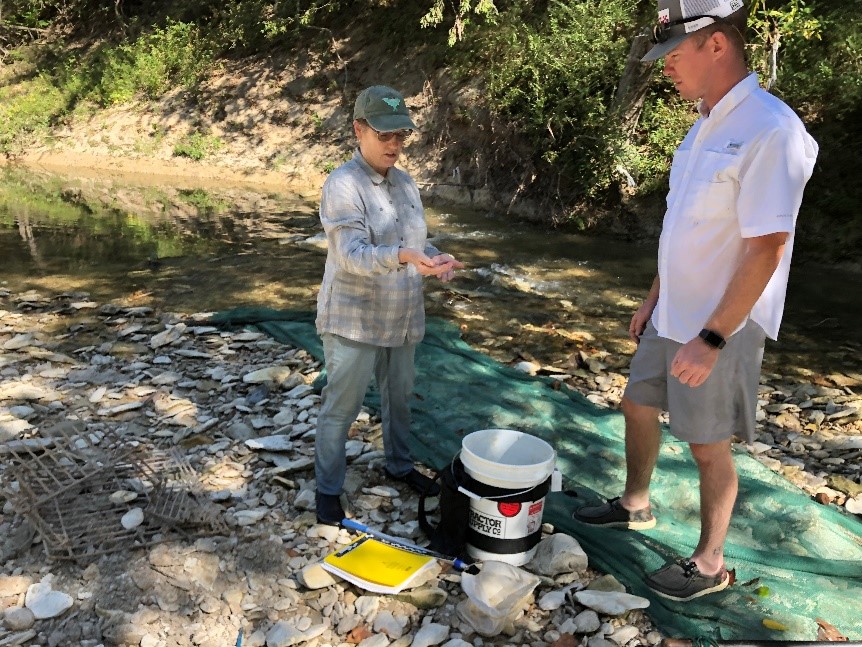 Before surveying fishes, the entire reach of Spring Creek within the Preserve was walked by Mr. Jordan and Ms. Ashleigh Miller. The sampling areas were selected by the biologist (Mr. Jordan) and documented with tablet-based GPS equipment. Once the walkthrough was complete, it was determined that one sampling site per mile of stream would provide a thorough account of all available habitat types within Spring Creek and the preserve. The sampling sites which best represented available fish habitat were selected due to the available instream riffle, pool, run, and glide habitat sequences. After the preliminary research was done, the real fun began!

Sampling took place on four separate days during the month of October. Fish were collected using a seine net, which was deployed by a 2 to 3 person crew under the supervision of a TPWD-permitted biologist (Mr. Jordan). As the net was pulled through the water, fish were corralled into the net of the seine. Fish captured after each seine haul were held in a 5-gallon buckets with adequate aeration until sampling was completed. Seining continued at each sampling site until no new species were collected. At the conclusion of each sampling day, fish were counted, identified down to the species level, and recorded. Representatives of each collected species were preserved and donated to the Fishes of Texas project at the University of Texas Austin. Visit this link for more information on the (awesome) Fishes of Texas project.

Now to the meat and potatoes! A total of 13 species were collected across all four sampling locations. Among the top three species collected were the red shiner (Cyprinella lutrensis), bullhead minnow (Pimephales vigilax), and the sand shiner (Notropis stramineus). Red shiners can be identified by their distinct, deep bodies. During the breeding season, the fins and bodies of males turn bright red/orange in color. The bullhead minnow has a long, slender body with a black dot at the base of the caudal fin and another at the front of the dorsal fin. Lastly, the sand shiner is difficult to identify and is considered to be rare within the Upper Trinity River basin. This species had been captured very few times in the Upper Trinity, and even fewer times in Spring Creek prior to this survey. Although considered “rare” within the basin, many sand shiners were collected during the fish survey and those caught, represented various life stages (juvenile to adult) which may indicate spawning is occurring in this section of Spring Creek. The most common instream habitat sequences observed throughout Spring Creek were riffles (shallow with faster moving water) and runs (smooth flowing waters of moderate depth). It is believed that the presence of these riffle and run habitats contributes to the diversity of fishes within this reach of Spring Creek, and may explain the occurrence of a rare species (sand shiner). Another interesting observation made during the survey was the possible collection of two very similar species of topminnow (Fundulus notatus and Fundulus olivaceus). These observations will help contribute to ongoing research that is investigating the distribution of these species within the Upper Trinity basin.

Fish surveys are always interesting, especially in areas where few have been done previously. This survey provided a great deal of information that can be and is being used in ongoing research. Hopefully, in the future more surveys can be performed to allow for a deeper look into the various fish species that reside in Spring Creek. The data from this survey was used to create a guide for Fishes of Spring Creek which can be found on iNaturalist.

Number and species of fishes collected via seining during the fish survey. Figure used with permission of Jeremy V. Jordan.

To see the complete technical report for this survey visit this link.

For a guide of fishes within the Preserve visit this link.

For more information about the Spring Creek Forest Preserve visit this link.