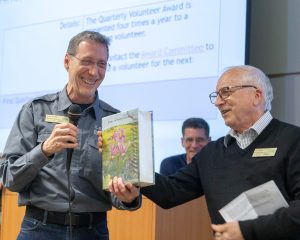 To borrow a line from the song “Home on the Range,” I have never heard a discouraging word about Gary Barton. If I had to compare Gary to anyone, my first thought would be Fred Rogers. You are always welcome in his neighborhood and he always has some kind things to say about you and others. To echo Mary Mamantov’s comment: “I will say I count him among the nicest and kindest people I know.”

As was mentioned at the March General Meeting, I was recently looking at our list of Quarterly Award winners, and it came to mind that they all had one thing in common – leadership by example. They all have quietly contributed to chapter service and set excellent examples for the rest of us. Gary is a prime example of this and is the 11th recipient of the NTMN Quarterly Award.

Gary grew up in Athens – not in Greece, but in Henderson County, the self-designated “Black-Eyed Pea Capital of the World.” He went to Trinity University in San Antonio and studied music – the organ to be exact. After graduating, he held forgettable jobs as a fur trader for Neiman Marcus and a stint with Federal Express. Along the way he rediscovered his love for farming and gardening, which translated into sharing his time and efforts with the Master Gardeners where he served as Vice President. When I first met him 5 years ago, he was spending the majority of his time working with the Master Gardeners, but he soon developed an interest in NTMN,  realizing his dream to become a master of everything in nature.

Gary is quick to respond to requests for help and can be counted on to give his best to every volunteer service or administrative work. This became especially apparent to me when he helped me organize a Big Chapter Project at Briarwood creating a native plant garden and installing informational signage in honor of Jim Varnum. Without his substantial efforts, the garden would not have become a reality.

Ellen Guiling adds: “I first met Gary just after moving into the home across the alley from him. A neighbor had invited me to walk the creek near our home and do a trash clean up along the way. Gary joined us with his Italian Greyhound, Frisco. We collected a bit of trash but I also realized that I had ‘collected’ a new friend.

“During our first spring, Doug and I sweated a weekend away creating a new vegetable garden. We were so proud and invited Gary over to take a look. He was so kind and congratulated us on the garden. We then crossed the alley to view his garden, and our egos were quickly deflated. Gary’s garden was already lush with color and growth, the highlight being a lovely large artichoke plant. We have since planted artichokes, to try to keep up with Gary (ha!) but ours are a feeble copy at best.

“Gary is especially good at bringing people together who can assist or enhance whatever project is at hand. He is nice, fun, and funny and always willing to help. He is also an amazing organ player. I must say that a favorite day for me is when I am gardening in the backyard and listening to Gary’s organ music from across the alley.”

He has just completed a term on the NTMN Board as State Representative. We are very pleased to honor Gary Barton as our first Quarterly Award winner for 2019. Ellen says it better than I can: “Many thanks to Gary for being a good friend to all, and for being a superb Master Naturalist.”