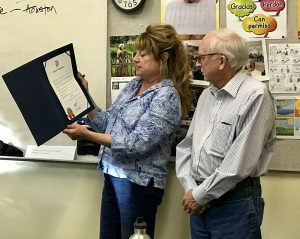 On April 9, the Blackland Prairie Chapter of the Native Prairies Association of Texas (BNPAT) recognized Jim Folger not only for all his leadership of Native Plants and Prairies Days for 5 years but also for his business acumen in helping the Chapter when it organized in 2014. Leigh Ann Ellis, President of BNPAT, said that “This award is to thank Jim for all the work he has done over the years. He has led Native Plants and Prairies Days, worked on the White Rock Lake Prairie Restoration Project, and helped our chapter.”

Jim received the City of Dallas Special Recognition Award from Mark Clayton, District 9 Council member. He was also given an official Texas flag that was flown in his honor at the Capitol of the Sovereign State of Texas on April 4, 2019, along with a certificate signed by State Representative Eric Johnson of District 100. The certificate stated that it it was being presented to Jim Folger Master Naturalist and Founder of Native Plants and Prairies Day.