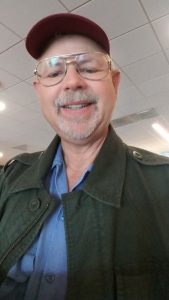 John was raised in rural Tarrant County in what was to become heavily developed south Arlington.  He hunted and fished, spending a lot of time outdoors watching plants and animals.  He earned BS in Wildlife and Fisheries Sciences at Texas A&M in 1979, then later took his MS in Horticulture at A&M in 1990.  His thesis studied the impact of differing soil types on the ornamental color performance of Little Bluestem grass.

John learned about native plant nurseries and landscaping in Texas.  He noticed the absence of native grasses.  A job search was punctuated by a word of mouth reference interested in buying a large number of native grasses as ornamentals.  John didn’t have a nursery then, but began one and the rush was on!

John has become more aggressively involved in public education over time.  The nursery has served it’s purpose, and is being phased out, or moved to a new partnership.  Landscaping has evolved.  There are more growers now selling native grasses, and more designers using them properly in projects ranging from parks to corporate headquarters and Presidential Libraries.  Some growers are very competent, but others ignore the details of local ecotypes, adversely affecting the landscaping results.  John’s ecological and horticultural training, plus keen observation, provide the background for understanding, competence, and sharing.

Each outing in nature with friends and family brings new details which John can learn and share, while he uses the grasses and other native plants to enrich the lives of all he can reach.

Plantings of native and adapted grasses are growing in frequency around the state.  One major area is the green roof on the BRIT building in Fort Worth.  It provides an excellent educational opportunity to showcase native wildflowers and grasses from a specific local, very dry, natural habitat.  The Bass Pro Shop near Grapevine Mills mall shows some of the mistakes that can be made by untutored landscapers ignoring our input. More successful plantings are Pioneer Park just north of the Dallas Convention Center, the Indian Tribal Monument on the OKC government grounds, and the ongoing prairie restoration efforts at TRAC and DCAC.  The Southwest Nature Preserve in Arlington is about to gain a major frontage prairie pollinator demonstration by both seeding and winter dormant grass transplants.  All ornamental grasses in Arlington’s Veteran’s Park Wildscape were originally donated by BLUESTEM NURSERY.  Volunteers at projects from a Montessouri School in Plano to Lake Mineral Wells State Park have laid out the plans, and begun the installation, of ornamental, native grass plantings of varying extent and preferring local ecotypes.  Work continues at several area schools.  Ongoing efforts to restore the natural community continue with donations of seeds, time, and live transplants.  Go, see, enjoy, learn.