Now that our colorful friends are back in town for a few months, namely the Cardinals and Blue Jays, we’ll recognize more variety in birdsong, even those among us who claim little success identifying species beyond owls and grackles. The doves have returned, soothingly cooing along the wires and pairs of Mergansers raucously race or chase each other from the stretch of pond a few blocks north, heading for goodness knows where, the loser trying to catch up a couple of minutes later. 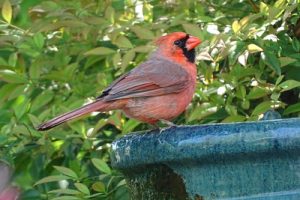 Spanish oaks in the neighborhood park, still mourning all that the storm took, are mollified by a dozen treelets waiting ready to replace whatever fell. We will enjoy our share of urban nature if we listen up at daybreak or dusk. Our commonplace garden fence has a bird feeder catering mostly to squirrels. Along the top a pair of mockingbirds are courting, three steps towards, two steps back, over and again until they make a final decision and fly off. A pair of Cardinals make their fourth annual visit; soon their young will fly clumsily to see if there’s anything left for them in the feeder.

In the familiar optimism of a North Texas spring, we would be bewildered to hear the exotic call of a twa-twa or rowti or picolet. Colorful, but not outrageously so, they are at home in Suriname in northeastern South America, a small republic with a marked Dutch colonial imprint. In the capital, Paramaribo, and in city parks around the country, these birds ‘strut their stuff’ as it were for local communities and lucky visitors who have stopped off here on cruises. Friends and family gather at the popular contests where owners bring the birds in cages to perform a 10-15 minutes concert. Competition is stiff: which bird sings best or loudest? Which will the crowds applaud?

I listen online to these birds in Suriname competing in foreign voices. And I decide our birds here in Dallas, with their daily commotion, the friendships and rivalry, are every bit as captivating.