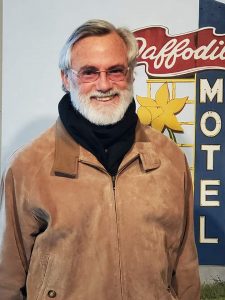 Scott was born in Chicago, but claimed his Texas heritage as soon as he could. He attended grade school and high school in Midland. Hailing from ranching and farming roots, Scott spent much of his childhood outdoors. Scott developed his love of nature and interest in protecting our environment at an early age; in younger days hunting and camping with his dad and working on the family land, and as an adult hiking, kayaking, and working on trails. He left Midland to pursue a college degree in biology at Emory University in Atlanta in the early 1970s. He received his environmental science master’s degree from UNT. Along the way, he met and married Jimmie Lynn, who grew up in Athens as a classmate of NTMN member Gary Barton.

Scott put his environmental sciences degree to good use for 30 years, and retired at the beginning of last year after serving as Environmental Services Director for the City of Carrollton.

Jimmie continues to teach art at Trinity Christian Academy. She and Scott enjoy art, travel, and hiking. They took a walking tour of Scotland a couple of years ago, and Scott has attended some of Jimmie’s art school trips – a notable one being to Israel. They have a son Robert living in Nashville, who is a folk-rock musician.

Scott continues to be an avid outdoorsman. He backpacked the Muir Trail last year in California, and regularly goes on backpacking trips each year to Big Bend with friends. He can be found exploring Dallas trails almost every week.

According to his sister and fellow NTMN member Nancy Wilson, he has been an inspiration to his family in his commitment to protecting our environment. We look forward to his leadership as president of our chapter.