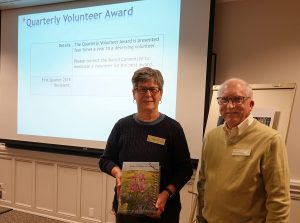 Natha Taylor has been honored as our first Quarterly Award winner of 2018. This article is entitled “Historic Birder,” because she has contributed greatly to our chapter as both an historian and as a bird instructor.

Natha graduated from the 2001 NTMN Class and is one of 7 people left from the first five formative years of our chapter. She also served as President in 2008 – 2009 and continues to provide her wisdom and counsel as past president at the board meetings.

She was one of the driving forces behind Birding 101 which four NTMNs formed in 2005.  She went on to become an exemplary instructor who has helped introduce the joys of birding to over 200 people. Although not related to her 31 years of teaching computer science and math, she put her experience to good work. Many on those have gone on to become Master Birders and now lead bird walks on their own.  In particular Shannon Love and Pam Difazio caught the birding bug and have gone on to become leaders. The class sparked their passion for birding. As Pat Jordan also comments: “Through all those years Natha has been the guiding force – organizing, reporting our sightings, and keeping us involved.”

She and her husband Tom have traveled and camped in most every one of the United States. I know they are regulars at High Island, near Galveston, Texas in the spring, watching the migration of songbirds from Central and South America.

Importantly, one of the major reasons for awarding Natha at this time is due to her retiring at the end of 2017 from her job as chapter Historian/Archivist. Our parent organization TMN started officially giving awards for the best chapter scrapbook in 2013.  Natha’s scrapbooks (with help from Bobbie Mayhew) have won an award at the annual state conference every single year – five in a row from 2013 to 2017.  We also won a People’s Choice Award for Best Scrapbook in 2008, also thanks to Natha.

In presenting the award to her at the general meeting, I compared her to a Norwegian woman who won medals in five straight years. Those of us who have been with the chapter for some time think she deserves a gold medal for all her contributions.