With his passionate volunteering for nature, devotion to educational outreach, and commitment to advanced training, Ned set the standard for being a TMN—before TMN existed! The TMN curriculum chapters on historic naturalists and forest ecology feature Ned. 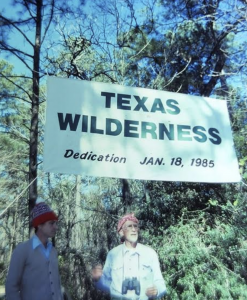 Nearly six feet tall with wavy red hair and piercing green eyes, Ned Fritz was a striking figure as a lawyer in the courtroom and on the trails of the natural spaces he passionately defended. Yet he was also a wonderful human being who wrote poetry, sang in a beautiful bass voice, loved his family passionately, and treated even his opponents with respect.

Ned knew land, coordinating the Texas Natural Areas Survey that led to the preservation of countless parcels by land trusts or governmental entities. The founder of the Texas land trust movement, Ned was instrumental in forming The Nature Conservancy Texas and went on to create the first Texas-only land trust, now known as Texas Land Conservancy.

His Texas Committee on Natural Resources led epic eco-battles in the 1960s through ’80s, eventually becoming Texas Conservation Alliance, and his Save Open Space was an incredible force in Dallas in the ‘70s and ‘80s. If you’ve hiked the Great Trinity Forest, explored along the Trinity River, or enjoyed a Dallas County Open Space Preserve, you owe much of those lands’ existence to Ned and his coalitions.

And now, this remarkable man— Texas’ greatest environmentalist ~ father of Texas nature preservation ~ founder of the Texas land trust movement—is deeply associated with our chapter. What a great point of pride!

Discover Ned’s fascinating life, and more about Genie’s considerable accomplishments, at Ned Fritz Legacy, NedFritz.com. For a synopsis of their achievements, click the Biography tab and select Ned in a Nutshell. Other sections will post online as funding becomes available. His biography is being done as a crowdfunded website since it wouldn’t be right to cut down trees for a book to honor such a famed forest defender.

Do you have a favorite Ned Fritz story? Have you any photos of Ned, Genie, or the places they preserved? The team would love to hear from you. Please email Amy.

“Ned had the courage to speak truth to power and to speak out against abusive policies and proposals. Yet he was always respectful, polite, and understanding of people on both sides of issues he raised and argued. He was our leader, our friend, and our hero.” – David Gray, Texas Conservation Alliance board member.