Ricky Linex is the speaker at the North Texas Master Naturalist August chapter meeting. He will speak on “Riparian Management – Why Creeks Act the Way They Do.”

He will also be available prior to the meeting, from 6:15 to 7 p.m., to autograph and sell his book on the range plants of North Central Texas. The book is extremely valuable to landowners, but will also be of interest to master naturalists. There are extensive descriptions of each plant with several color photos taken at different times of the year to aid in identification.

Ricky will be selling the book for $20 which is discounted as he developed the book while on the job at NRCS. Please bring cash or a check to  pay for the book.

Range Plants of North Central Texas; A Land User’s Guide to Their Identification, Value and Management.

The book first became available last September and features 324 plants: 160 forbs, 59 grasses and 105 woody plants of the area.  The cost is a flat $20.00 per book. To buy the books and have autographed, come to the NTMN meeting 30 minutes early. Bring cash or check. 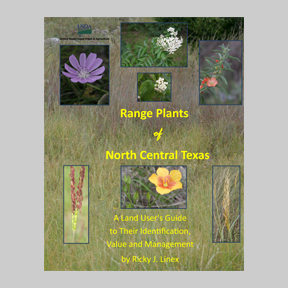 It was a labor of love eight years in the making from a North Texan who loves the land, its native plants and animals. Now wildlife biologist Ricky J. Linex of Weatherford has published his first book, and while the utilitarian title Range Plants of North Central Texas may not sound like a good beach read, it’s a must-have for anyone who wants to identify and manage the native plants on his property and understand their value.

Linex has spent his career with the U.S. Department of Agriculture. After graduating from Texas Tech University in 1982, he joined what was then the USDA’s Soil Conservation Service, which traced is origins to 1935 and the Dust Bowl. The agency’s focus changed over the decades, and it was renamed the Natural Resources Conservation Service (NRCS) in 1994; Linex’s focus changed as well — from range specialist to wildlife biologist.

In his NRCS job, he is still working with Texas ranchers and farmers and more recently with landowners from urban backgrounds who are new to rural areas. Those are the folks he had in mind when he began taking the thousands of photos of hundreds of range plants for his book, which was published this fall by the NRCS.

“People who have just bought land many not have an ag background,” he said. “People who are wanting to manage for livestock or wildlife or both [can find useful information in the book] whether an old rancher or anyone new to the land.”

Linex began the book project in his spare time, modeling it on a colleague’s book on range-land plants in the Texas Panhandle. But as happens with most projects that seem simple at the outset, this one got bigger as he went along. While he was taking most of the color photos of the plants, he realized he needed “not just one photo — I needed photos of leaves, seeds, flowers.” So the book is chock full of multiple color photos to help identify plants.

While traveling for his regular NRCS duties, Linex covers a lot of miles and he put those hours on the Texas highways to good use.

“A lot of photos I took from the roadsides because the plants are not grazed there,” he said.

He had planned to include 210 species in the book, but that number grew too. The finished book covers 324 plants, organized by family in three general groupings: forbs (including wildflowers), grasses and woody plants. Typing at his kitchen table, Linex wrote the text for each plant, describing its physical characteristics, value to livestock and wildlife, and management. The final product is a 345-page, spiral-bound 8 1/2-by-11-inch reference volume that reflects Linex’s deep knowledge of the North Texas environment.

While the NRCS published his book, 96 percent of the funding to print it came from what might seem an unlikely source — quail hunters. Major sponsors were the Rolling Plains Quail Research Ranch, Quail Coalition and especially the Park Cities Quail chapter, based in the elite Dallas communities of Highland Park and University Park. The decline in the state’s quail population prompted those groups to back his project, Linex said, to support expanding knowledge about quail habitat.

Since it came off the press, the book has been marketed primarily by word of mouth and through the network of state Soil and Water Conservation district offices in the 51 counties that make up the NRCS’s Zone 5, where Linex is based. He and colleagues have “pony-expressed” boxes of the books wherever there is a demand, and indeed, the response has surprised the first-time author. In five weeks, 2,040 copies were sold at $20 apiece. The income will go to pay for a second printing.

The book is available at most Soil and Water Conservation district offices, including in Denton, Hood, Johnson, Palo Pinto, Parker, Somervell and Wise counties. (The Parker County office is at 604 N. Main St. in Weatherford.) In addition, the Botanical Research Institute of Texas (BRIT) in Fort Worth is selling the book and will take online orders.