What is that sound? A brief history of the Great-Tailed Grackle

For most Dallas Fort Worth residents, a trip to the grocery store or local eatery almost always guarantees two things. The first is that you are most likely going to have to drive there, and the second is once you arrive you will see a group of birds being quite raucous. To scientists these birds are known as Quiscalus mexicanus, but to most people they are grackles. In Texas there are three species of grackles, but the most common and seemingly ubiquitous one is the Great-Tailed Grackle. This however has not always been the case, and their history of immigration to the United States has been helped immensely by the citizenry albeit inadvertently. To better understand this, it is important to know a little bit about their life history. 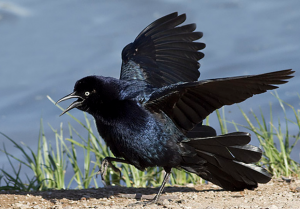 Quiscalus mexicanus originally evolved in Central America. Much like its sister species the Boat-Tailed Grackle, Quiscalus major, it needs to have access to standing water, but unlike Q. major it has evolved so that it could live outside of coastal wetlands and colonize the interior of its territories. This adaptation provided them with a wide range of new places to migrate to and begin establishing colonies. A second reason this bird has done so well is due to its omnivorous diet. Depending on the time of year they can adapt their diet. In spring and summer, they are known to increase their consumption of animals which include spiders, worms, grasshoppers, snails, moths, and many others. This seasonal diet coincides with their breeding season and the need for more calcium content to produce viable eggs, but to also ensure their young get enough protein to develop properly and have a high chance at fledging. Their year-round diet includes plant matter such as cultivated grains and fruits. The most crucial characteristic for their range expansion is their ability to fly. To someone who is not accustomed to watching birds this may seem like an odd thing to point out because almost all birds fly, but not all flight is equal. Grackles are particularly powerful flyers and can travel a good distance at a time. These characteristics aside, a fourth and unlikely trait helped them in their transition away from the coast over 500 years ago.

This first colonization of interior lands was recorded by Fray Bernardino de Sahagún in the late 15th century in the Mexican Basin where modern day Mexico City is located. In his book called the Florentine Codex he states that emperor Ahuitzotl ordered the bird to be brought in due to the beautiful iridescence of their feathers. Due to the different species that lived in the area, which could outcompete the grackles for resources, this task would mean continually going back and forth from the coasts and bringing the birds in. However, due to the rise of Tenochtitlan agriculture had become much more important for maintaining the human population. The preferred method of growing food was the use of the chinampa which is a raised garden bed of mud and vegetation built on a lake. By changing the habitat to include large bodies of standing water it allowed for the grackles to have the water they needed, plenty of food year-round, and they could fly throughout the empire’s agricultural areas and have fruits, grains, and the insects that fed on the crops were plentiful. This initial colonization inland did however run its course when the Spanish arrived and destroyed Tenochtitlan in 1521. Many natives left the area or succumbed to disease and as the human population decreased so did the grackles. Although the inland migrations stopped the grackles did move their way up the coast and eventually made it to North America.

The earliest available records place the species as a south Texas resident whose range extended up to Corpus Christi. At this time, the American civil war was less than two decades prior, and a large majority of the human population was still east of the Mississippi river. This however would change in the 20th century as more and more citizenry moved west and began to establish cities and make the necessary changes to the land in order to accommodate their growing populations. Q. mexicanus was not far behind. Through the 1930s their population was only known from Texas, Arizona, and New Mexico and they were not documented as breeding yearly in the areas although zoologists did find evidence that proved some colonies had success. It was not until the 1950s that the birds would eventually make it out of these states and continue their northern expansion. The second half of the 20th century would see the bird increase its range extremely quickly and by the late 90s there were reported sightings at the Canadian border. In the same pattern that the Mexican natives had seen the grackle populations grow as their cities and agricultural components grow so did the Americans. Although the use of chinampas does not appear in North America the use of freshwater reservoirs for cities does. Couple that with the many suburbs surrounding cities and more habitat opening up for their nesting preferences, and once again the grackle has found a situation in which to thrive. In addition to this many bird enthusiasts will place bird feeders on their lawn, and many gardeners may decide to grow plants that are an edible resource for them or provide a home for their insect meals. All of these combine to allow the bird to reside alongside us. This is also where we can really see how strong flight is a benefit. Since Q. mexicanus is a tropical bird, it has not evolved with the temperature fluctuations that are experienced this far north, but it can move freely over long distances and use our cities as islands where it can find refuge and meet all of its requirements for breeding. Much like the dog, the grackle has a past that is closely linked to human settlement and given its great adaptability, it will most likely have a future interwoven with that of humans.