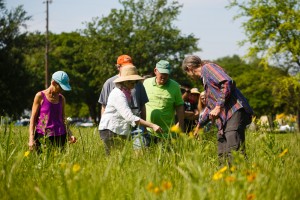 The original White Rock Prairie Restoration/Preservation Project dates back 20 years to 1999. Becky Rader, former NTMN President, was the activity leader. There was a Prairie Advisory Committee made up of Jim Eidson (Texas Nature Conservancy), Dr. Lou Verner (Texas Parks and Wildlife Department), Becky as wildlife biologist, Dallas Parks and Recreation Department staff, Barney Lipscomb (Botanical Research Institute of Texas), Jim Varnum (NTMN), and more. They put together a management plan for the remnants around White Rock Lake which comprised the 250 acres – the most at any one site in Dallas. As part of the project, Becky and others identified over 350 plant species on the remnants.

TPWD helped to complete a business plan to address the preservation and restoration issues but the plan was vetoed. Subsequently, the plan was dropped due to lack of participation in 2006. Of note, in 2005, thanks to Becky’s efforts, the Texas Land Steward Award was given for those remnants at the lake.

Fast forward to 2012, when the Dallas Park Board authorized parking in the Texas Lone Star Land Steward prairie grass and wildflower area at Winfrey Point. It was discovered that the takeover of Winfrey Point was part of a larger planned expansion of the Dallas Arboretum for parking use.

As many of you will recall, there was major public backlash when the plans became known, accompanied by a protest march to the Arboretum entrance. Ultimately, the Arboretum cancelled those plans. The song of the moment was Big Yellow Taxi by Joni Mitchell:

“Don’t it always seem to go
That you don’t know what you’ve got
Till it’s gone
They paved paradise
And put up a parking lot.”

In the aftermath of all this, it occurred to me that the public needed more education about the value of native plants and the rare blackland prairie remnants that exist around Dallas. In 2013, after discussing our intent to do a public event without getting political, at the suggestion of our State Coordinator Michelle Haggerty, we chose the name Love our Native Plants & Prairies Day (later changed to Native Plants and Prairies Day). It was the first of 5 of these annual public events for our chapter,

The White Rock Prairie Restoration and Preservation Project (WRPP) was approved by the NTMN Board in 2015. It was intended as a companion effort to Native Plants & Prairies Day that would involve the Dallas community in addressing the natural resources around White Rock Lake.

Around that same time Brett Johnson, who was our TPWD chapter advisor, took a new job as Urban Biologist for the City of Dallas. As part of Park and Recreation (DPARD), he was assigned the responsibility of management of the prairie remnant projects. He understood the challenges of prairie management and set a 3-5 year goal to maintain or restore the best prairie habitat that could be achieved.

The initial work in preparing a management plan was an official “Prairie Assessment” on 16 units representing 13 acres of prairie remnants. Experts visited the areas, cataloged plants, and assessed the “quality” of the these remnants in 2016. An “Adopt-a-Prairie” approach was subsequently implemented, wherein various community groups could work on specific remnants. NTMN was the first to sign a “Beautification Agreement” with the City and was assigned the area near Boy Scout Hill as our remnant.

Sara Beckelman agreed to join me as co-leader on the WRPP. Overall, we described the activity as monitoring and managing the flora and fauna of the area. Volunteers participate in plant and wildlife surveys, seed collection, planting, nature walks, and education of the public.

Activities are scheduled as the need arises. In the past these activities have included:

As of the beginning of 2019, an added restoration activity has been included – the White Rock Peninsula Prairie Restoration Project. Brenda Catlett has joined Sara and me as an activity leader for this project. It will be a collaboration between Peninsula Neighborhood Association, the Blackland Chapter of Native Prairies Association (BNPAT), DPARD, and NTMN to restore the prairie at Unit 7-1 of White Rock Lake Park. As is the case with all our work done at White Rock Lake, Brett Johnson, as Urban Biologist, must approve all of the activities.