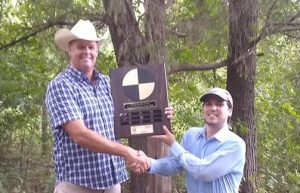 On September 16, Texas Stream Team announced citizen scientist Ben Sandifer as the 2019 Citizen Scientist of the Year. Sandifer monitors one of the last free flowing springs in Dallas County, Big Spring, and has never missed a month of monitoring since joining Texas Stream Team in June 2013.

Before becoming a citizen scientist, Sandifer, whose profession is in accounting, spent a great amount of volunteer time working to conserve and preserve Big Spring, which, at the time, was in danger of being turned into a water station for livestock. Sandifer said there was an immediate need to find out what the water quality looked like for the spring.

“There is a deep human history to the site that dates back many thousands of years to Native American history and European pioneers,” Sandifer said “A lot of that and the free-flowing springs would have likely been destroyed if the area around the spring was developed.”

Sandifer said data collection is very important to him because it allows the decision makers – the policy makers at city hall- to see his water quality data and make informed decisions about what’s best for water quality and the spring.

“I leave out my own opinion about the data I gather at Big Spring, because I think my data – which I make sure is collected as professionally as possible – is good enough to be an advocate on its own with the merits it’s collected,” he said. “That data has proven very useful with city council people, in the mayor’s office, and some of the head management in Dallas at city hall regarding efforts to preserve Big Spring.”

Big Spring is located in the Dallas Great Trinity Forest in Dallas County, which is the largest urban hardwood bottomland in North America. Data shows that the water is the cleanest in town, with zero E.coli at the source. Numerous volunteers, including Sandifer, privately funded carbon-14 dating at Big Spring, and the water dates back 600 years as it comes out of the ground. It hasn’t seen the light of day since then.

In addition to his monthly monitoring, Sandifer has helped lead several Texas Stream Team citizen scientist trainings for various groups. One group was able to take the knowledge they learned to address a water issue in another part of the world.

“We trained some folks from Engineers Without Borders at Southern Methodist University at Big Spring,” he said, “and they went off to bring fresh water to people in Equatorial Africa for the first time!”

Sandifer said he is deeply honored to receive the 2019 Citizen Scientist of the Year Award and feels as though this is an award that a great many people share a part in.

“Without the support from a lot of people, I wouldn’t be able to do the work that I do,” Sandifer said. “For that, I want to thank those people who are the supporting cast for people like me who are just a cog in the wheel with Texas Stream Team.” 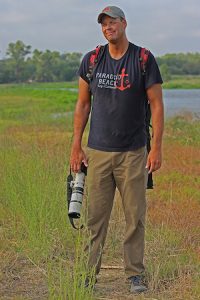