It was a great night for North Texas Master Naturalists on November 14 at the Green Source DFW Sustainable Leadership Awards. We packed three tables full of NTMNs and friends. The Awards are hosted by Green Source DFW and its parent nonprofit the Memnosyne Institute. Every year since 2012, local green heroes from a variety of fields have been celebrated at the annual gala. The nominees are chosen by Green Source DFW readers. The winners were selected by a panel of 5 judges. 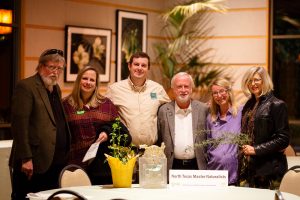 Competition in the category of Conservation Activist was described as intense. Indeed, it ended in a tie between our advisor Sam Kieschnick of Texas Parks & Wildlife and our colleague Clint Wolfe of Texas AgriLife’s Water University. NTMN Anne Marie Bristow was nominated for her work at Twelve Hills and John Bunker Sands Wetland Center, as well as Richard Freiheit of Lewisville Lake Environmental Learning Area (LLELA).

The winner of the Green Project or Program was Amy King of GoodWork coworking eco-center. But we were rooting for our Roger Sanderson, recently retired from Texas Discovery Gardens, who is moving to Alabama soon.

Another competitive category was the Coke Buchanan Volunteer of the Year. While the team from the DFW Solar Tour was the winner, we had high hopes for Laura Kimberly, NTMN new class director and LLELA uber volunteer, and Bruce Stewart, outgoing NTMN president cited for his modernizing of the group’s online presence and announcements systems to make NTMN a “powerhouse force for Dallas nature.” And we were proud of fellow nominee John MacFarlane of Cross Timbers Master Naturalists and Fort Worth Sierra Club.

The Environmental Reporting Award went to columnist Robert Wilnosky of The Dallas Morning News who did many an eco-expose while recovering from advanced kidney cancer.

Noted in the Unsung Heroes Award was Kirk Miller of Dallas Sierra Club and Lonny Shivers of EarthX.

John and Margie Haley were honored with the Founders Award and Molly Rooke received the Lifetime Achievement Award.

We at North Texas Master Naturalists are immensely proud to have been included among these impressive eco activists.

The wine bar and buffet were superb. After the awards, we enjoyed a performance of Legend of Big Bend by Austin performing arts ensemble Montopolis who wove photography and videography with storytelling and poetry to a fascinating live musical score that blurred the lines between chamber music, rock, and C&W.

To see more pictures of the event, please go here.